Havana is the capital city, major port, and leading commercial centre of Cuba. The city is one of the 14 Cuban provinces. The city/province has 2.4 million inhabitants, and the urban area over 3.7 million, making Havana the largest city in both Cuba and the Caribbean region.

King Philip II of Spain granted Havana the title of City in 1592 and a royal decree in 1634 recognized its importance by officially designated as the "Key to the New World and Rampart of the West Indies". Havana's coat of arms carries this inscription. The Spaniards began building fortifications, and in 1553 they transferred the governor's residence to Havana from Santiago de Cuba on the eastern end of the island, thus making Havana the de facto capital. The importance of harbour fortifications was early recognized as English, French, and Dutch sea marauders attacked the city in the 16th century. The sinking of the U.S. battleship Maine in Havana's harbor in 1898 was the immediate cause of the Spanish-American War. 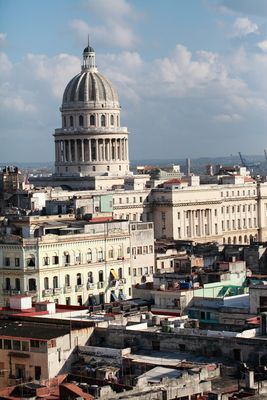