Crown Prince Ludwig, later to become King Ludwig I, was married to Princess Therese of Saxony-Hildburghausen on 12th October 1810. The citizens of Munich were invited to attend the festivities held on the fields in front of the city gates to celebrate the happy royal event. The fields have been named Theresienwiese (Theresa´s fields) in honor of the Crown Princess ever since, although the locals have since abbreviated the name simply to the Wiesn.
Horse races in the presence of the Royal Family marked the close of the event that was celebrated as a festival for the whole of Bavaria. The decision to repeat the horse races in the subsequent year gave rise to the tradition of the Oktoberfest.
The Oktoberfest continues in 1811
In 1811 an added feature to the horse races was the first Agricultural Show, designed to boost Bavarian agriculture.
The horse races, which were the oldest and - at one time - the most popular event of the festival are no longer held today. But the Agricultural Show is still held every three years during the Oktoberfest on the southern part of the festival grounds.
In the first few decades the choice of amusements was sparse. The first carousel and two swings were set up in 1818. Visitors were able to quench their thirst at small beer stands which grew rapidly in number. In 1896 the beer stands were replaced by the first beer tents and halls set up by enterprising landlords with the backing of the breweries.
The remainder of the festival site was taken up by a fun-fair. The range of carousels etc. on offer was already increasing rapidly in the 1870s as the fairground trade continued to grow and develop in Germany.

174st Oktoberfest 2007
Today, the Oktoberfest is the largest festival in the world, with an international flavor characteristic of the 21th century: some 6 million visitors from all around the world converge on the Oktoberfest each year. The famous Oktoberfest with visitors from all over the world has an enormous influence on the economy of Munich and the surrounding area . Approximately 955 Millions EURO during the 16 days are spent - 450 Mio EURO on the festival grounds for food, drinks and entertainment, 205 Mio EUR0 for shopping in and around Munich, public transport and restaurants as well as about 300 Mio EURO for hotel accomodation. About 12,000 people are employed to enable the world´s largest and most popular festival.
Beside of those historical and economic facts, the Oktoberfest has a linguistic mean as one of the worldwide known and USED german words and a cultural mean with the different events: The Grand entry of the Oktoberfest landlords and breweries is is the official prelude to the opening of the Oktoberfest and involves about 1,000 participants, including the landlords´ families in decorated carriages, the magnificent horse-drawn drays of the Munich breweries, waitresses on decorated floats and all the beer tent bands. Oktoberfest Costume and Riflemen´s Parade is the world famous procession on the first Sunday of the Oktoberfest. The Costume und Riflemen´s Procession gives an impressive insight into the fascinating diversity of customs rooted in the heart of Bavaria, in Franconia, Swabia, the states of Germany and in neighboring European countries. A varied succession of regional costume groups, "troops" in historical uniforms, marching bands, riflemen, thoroughbred horses, oxen, cows, goats, the decorated drays of the Munich breweries, floats displaying typical local traditions and historic carriages all pass by in a 7-kilometer-long procession through the streets of the city center. Ribboned trees, harvest garlands, craftsmen´s tools from bygone days, harvest produce, dancers decorated with flowers, stars and crowns, trumpeters on horseback, flag-throwers and a host of other performers transform this traditional Munich procession into a brilliant highlight on the first Sunday of the Oktoberfest.
Those events and the Oktoberfest itself are some of the most important and wellknown bavarian and german highlights of tradition and an increasing mean of regional selfconsciousness of different regions of other nations too in Europe. 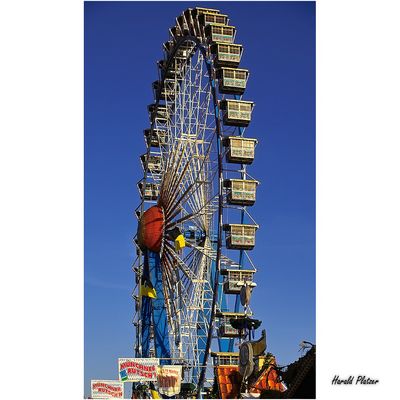