Sagaing Division is an administrative division of Myanmar, located in the north-western part of the country. It is bordered by India to the north, Kachin State, Shan State, and Mandalay Division to the east, Mandalay Division and Magway Division to the south, with the Ayeyarwady River forming a greater part of its eastern and also southern boundary, and Chin State and India to the west. The division has an area of 93,527 km², and population (1996) of over 5,300,000. The capital is Sagaing.

The major cities are Sagaing, Monywa, Shwebo, Katha, and Kale. Mingun with its famous bell an the Hsinbyume-Pagoda are located near Sagaing.

The Bamar (Burmans) are the majority ethnic group in the dry regions and along the Mandalay-Myitkyina Railroad. Shan live in the upper Chindwin River valley. A sizable minority of Naga resides in the north of north-west mountain ranges and Chin in the south. Smaller ethnic groups native to the Division include the Kadu and Ganang, who live in the upper Mu River valley and Meza River valley. Agriculture is the chief occupation. The leading crop is rice, which occupies most of the arable ground. Other crops include wheat, sesame, peanut, pulses, cotton, and tobacco. Sagaing is Myanmar's leading producer of wheat, contributing more than 80% of the country's total production. Forestry is important in the wetter upper regions along the Chindwin River, with teak and other hardwoods extracted. Industry includes textiles, copper refining, gold smelting, and a diesel engine plant. 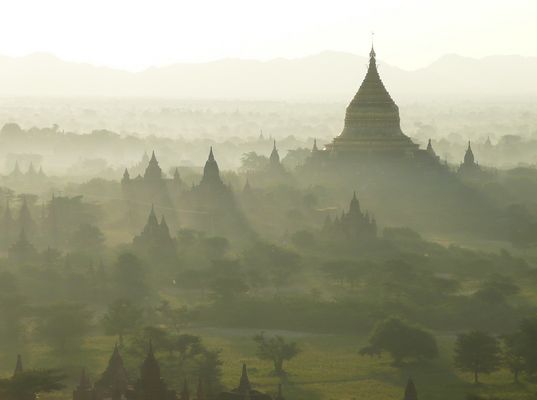