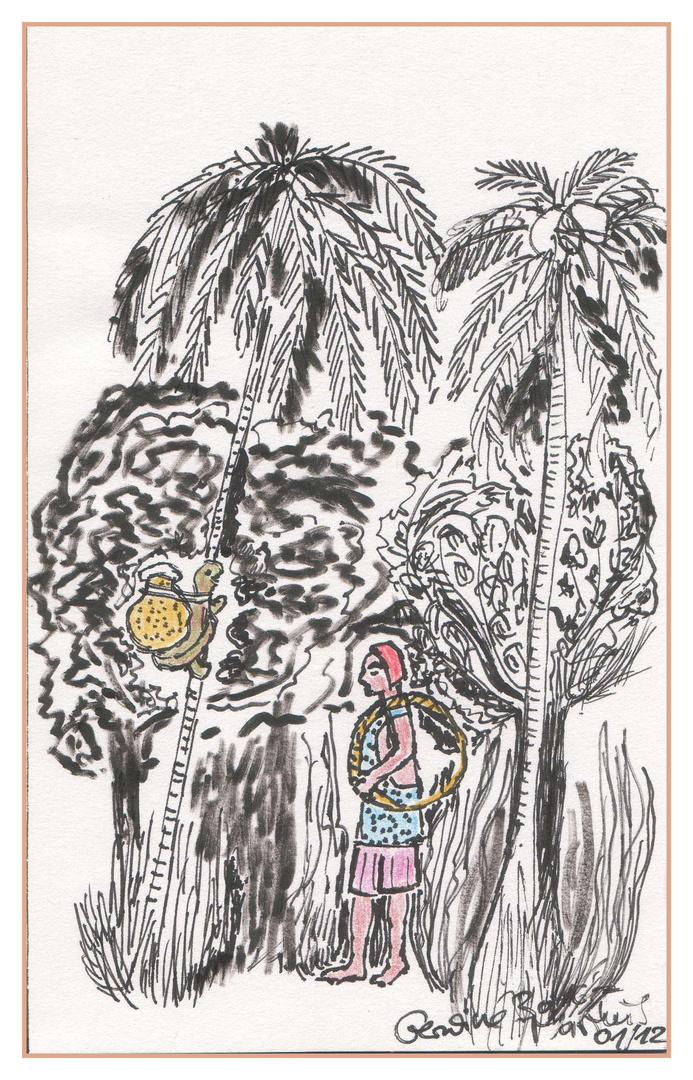 This is tortoise, a famous West African character featuring in storytelling. This is a Yoruba folk tale as told by Kunle Akinsemoyin

One morning a long long time ago, tortoise woke up, feeling very angry with the world.
What shall I do to show my anger, he said to himself.
He thought and thought, scratched his head and thought again. Then he had an idea which pleased him so much that he patted himself on the back and said: “Bright idea! Bright idea! And so easy to carry out.”
His bright idea was to collect all the wisdom in the world and hide it where no one could find it.
The first thing he did was to get hold of the largest clay pot that was made. This he found at the market and being a crafty anmimal, he talked and talked and talked till it was sold to him for very little money. The he went round and collected all the wisdom he could find. This took him a week. He put it all in the pot which he covered with a piece of leather, held tightly in place with a piece of straw.
“Now, where shall I hide it?” he asked himself.
He thought and thought, scratched his head and thought again. Then he gave a shout of joy and said:”I’ve got it. I’ve got it. I’ll hide it on top of the tallest tree.”
So he went for a walk in the forest and had a good look round. The tallest tree was either the Palm Tree or the Coconut Tree. But he liked the look of the Palm Tree best and so he chose it.
Having chosen the tallest Palm Tree, he went back for the pot, slung it on his back and began to climb.
He did not get far before he had to come down. He rested a little and then tried again. But he did not get far before the weight of the pot was too much for him, and had to come down again. He kept on trying, but he never got any far up the tree.
Unknown to him, a man passing by had seen him and had been watching him for some time. Suddenly the man loughed out loud. Tortoise heard and was angry.
“What are you trying to do?” the man said.
“Mind your own business,” came the reply.
“Oh, don’t be cross!” said the man in a friendly voice, “can I help you?”
“No!”
“Tortoise!” the man went on, “you can’t climb a Palm Tree without a strong piece of rope tied around yourself and the tree.”
“How do you know?”
“Because climbing Palm Trees is my trade. I’m a Palm Wine Tapper.”
“Go away!”said tortoise, “I don’t need your help!”
“Very well. Very well. You’ll be sorry, tortoise.”
“Will you go away, you are only a man!”
Without another word the man left. Tortoise made sure he was well out of sight, then he began climbing again.
This time he got on better. Slowly but surely he climbed higher and higher.
I wish that man was here to see me now’ he said to himself, feeling very, very pleased.
Nearer and nearer the top he climbed. And then it happened. He missed his foothold. Pot and Tortoise came crashing down.
The pot was smashed into a thousand pieces. And tortoise got such an ugly hump on his back that from that day on he has worn a shell to hide it.