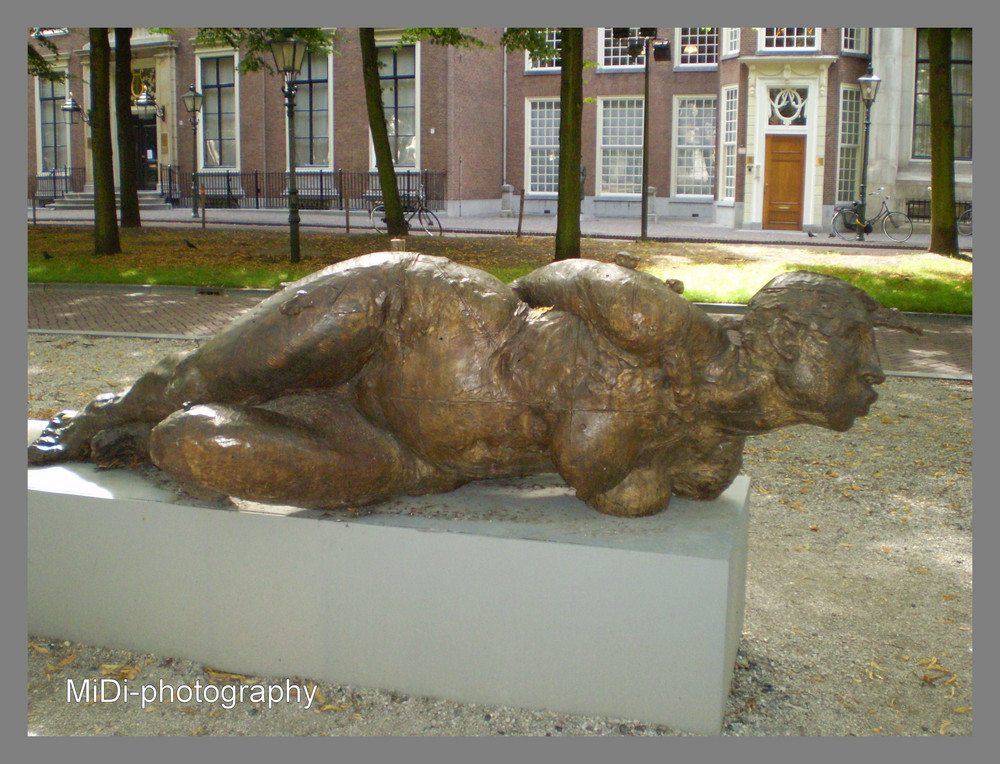 This year, in the historic heart of The Hague, The Hague Sculpture will present the Mexican artist Javier Marín with works made in bronze, marble and polyester resin. The Hague Sculpture’s choice for this one-man exhibition represents a new direction. The Voorhout is a pre-eminently suitable location for a wide-ranging audience to make a seemingly chance acquaintanceship with contemporary sculpture. It is a spot that more than ever before invites you to take a stroll amidst charming trees and historical buildings, and particularly a place that lends itself for an exposition of monumental sculpture. Javier Marín has proved that his voluminous sculptures can make a profound impression when presented in the public space. His work has been exhibited in Mexico City, Madrid, Pietrasanta and recently also in Milan, among other places on the plaza in front of the Scala Theatre and besides the Dom in front of the former Royal Palace.

An important part of the exhibition is formed by two enormous circles filled with fragments of human figures. Javier Marín associates these circles with the Aztec goddess Chalchihuitl, the wife of the rain god Tloloc. She is the goddess of rivers, lakes and streams, and the source of ever-emergent life. These monumental sculptures depict the dissociated attitude to life of our times, with its hasty pursuit of beauty and its fear of sudden destruction.
*

Javier Marín
.
Javier Marín was born in 1962 in the city of Uruapan in the region of Michoacán in the west of Mexico. He studied at the Academy of San Carlos in Mexico City – the city where he still lives and works today. Initially he made paintings and drawings, but later started making sculptures of terracotta, polyester resin and bronze. From 1983 on he took part in groups exhibitions; his first one-man exhibition was held in the Casa de la Cultura in Morélia (Mexico). Expositions of his work followed in the Museo de Bellas Artes in Mexico City, in the Espace Pierre Cardin in Paris, in the Mexican Pavillion at the Venice Biennale (2003), on the Plaza de Cibeles in Madrid, on the Piazza del Duomo in Pietrasanta, and currently in the Rotonda di via Besana and the plaza in front of the Scala in Milan.

De criticus Santiago Mutis schreef over Javier Marín:
“Nothing in Javier Marín’s art could make us think he is a young artist. His maturity overwhelms us.´